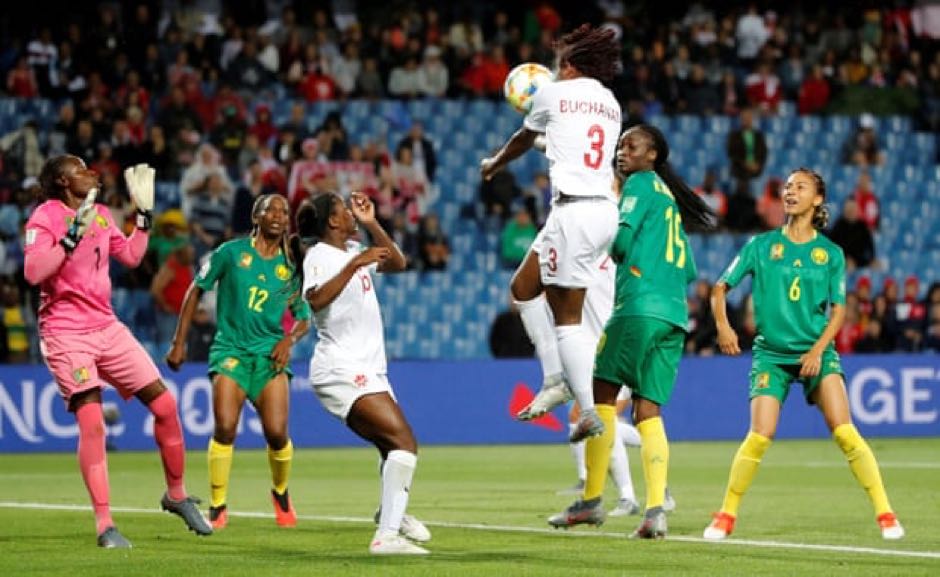 Canada’s Kadeisha Buchanan scored the only goal of the game at the stroke of the half time when she stormed at a corner and delivered a textbook header with Indomitable Lionesses goalkeeper Ngo Ndom well beaten.

Cameroon had completely dominated the opening period but lost concentration in the closing minutes of the first stanza and conceded too many set pieces, especially corner kicks, from which the Canadians took the lead.

Nichelle Prince hit the outside of the post just before Buchanan’s goal and then had also put a close-in effort wide on the opening minutes of the match.

Njoya Ajala often left her supposed central midfield role to join the attack, a move that pushed Ndoumbouk to come looking for the ball.

Around the half-hour mark Ndoumbouk began to exert her influence on the game again, first firing a missile of a shot just wide of Labbe's left-hand post before forcing the stand-in goalkeeper into a punch off her goal-line with a dipping free-kick five minutes later.

12 minutes after the restart Meffometou made a half chance with a diagonal cross into the penalty area, but Ajara Nchout was just unable to reach the ball.

With just under 20 minutes to play, the Cameroon finally forced Labbe into a save of note: She had to move sharply to his right to keep out a Manie free-kick as Canada were forced onto the back foot.

Yet the Reds still had a chance to kill the game off on 76 minutes when Janine Beckie was gifted a shooting chance from a just a few metres out, but the Manchester City’s forward fluffed the opportunity.

In the 82nd minute Gabrielle Onguene almost scored a sensational goal after she spotted Labbe off her line and went for a long range lob, but the keeper quickly backpedalled and made an excellent save to keep her side in the game.

However, Cameroon could find no way past Canada's defence as Africa’s three representatives woeful start continued at the World Cup.

Nigeria and South Africa, who finished 1-2 in Africa qualifying, lost 3-0 to Norway and 3-1 to Spain, respectively.