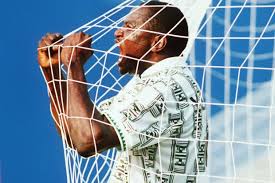 Yekini represented Nigeria in five major tournaments and was named the African Footballer of the Year in 1993. In addition to playing in the 1994 World Cup, he also played in the 1994 Africa Cup of Nations, 1998 FIFA World Cup, and 1988 Olympics.

Sadly, this all-time great footballer died at age 48 after a series of personal setbacks and an extended illness.