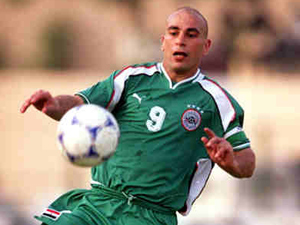 Egypt's Hossam Hassan Hussein was born in 1966 alongside his twin brother, Ibrahim, with whom he shared a love of the game and a long footballer career. Though both men are exceptional athletes, Hossam Hussein is notable for being Egypt's all-time top goal scorer with 68 goals out of 176 appearances. Career-wise, Hussein scored 179 goals out of 402 appearances. Hussein played for the national team from 1985 to 2006, taking it to 1990 World Cup and 7 African Cup of Nations tournaments.

Throughout his career, Hussein appeared in numerous championship matches, earning honors such as: Top Scorer 1998 African Cup of Nations and "Best African Footballer in the Past 50 Years" from the Confederation of African Football. After retiring as a player, Hussein entered the coaching profession and currently serves as the head coach for Al-Ittihad Alexandria.