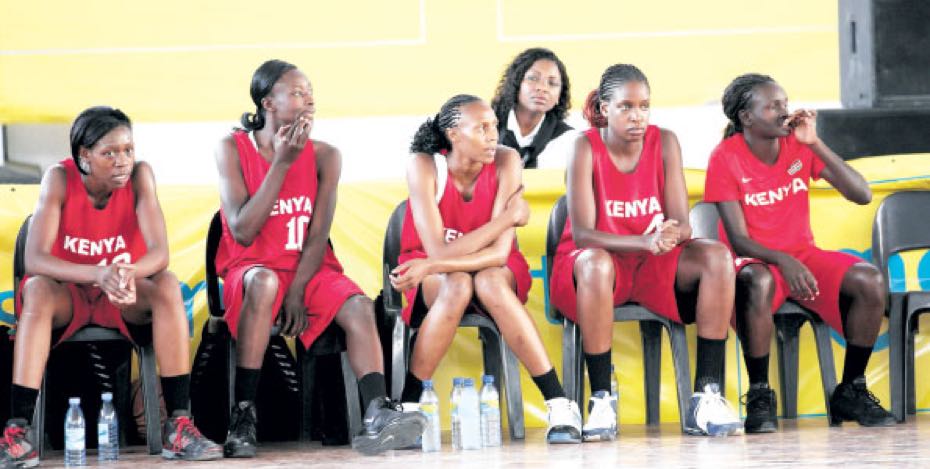 On August 10th 2019, Kenya women’s national basketball team, The Lionesses, left Nairobi for Dakar, Senegal to participate in the FIBA Women’s Afro-basket 2019, where their main target was a top-six finish.

The national side is pooled in Group D alongside 2017 bronze medalists Mozambique and Cape Verde and at stake is a ticket to Tokyo 2020 Olympics Games.

The Lionesses, coached by Ronny Owino, had planned to send 14 players to the tournament, but to the surprise of many of the fans, only ten players travelled to the West African country.

The Kenya Basketball Federation (KBF) was forced to drop two players together with the team assistant coach in order to avoid hefty fines from the world basketball governing body, FIBA.

The team simply lacked enough funds to cater for the trip. The mandate of the government is to provide travel and accommodation facilities for any national team travelling abroad to represent the nation.

Instead of travelling on the same plane, the players travelled in two batches with the first group taking off via Ethiopian Airlines while the next group arrived aboard Kenya Airways.

Recently, the men’s team represented the country well during the FIBA men Africa Cup of Nations in Bamako, Mali, a recipe that made fans anticipate much from the women's team too.

Just like their male counterparts, the Lionesses travelled without sponsorship from the Sports Fund and that was evident in the group opener against Mozambique as the team went down 55-39 in a one-sided match, where mental weakness played a vital role.

The Lionesses had arrived less than ten hours before the fixture without their four dependable players Natalie Akinyi, Becky Nkatha, Melissa Akinyi and Salma Akinyi just because the government could not provide the team with tickets.

Against Mozambique, the Lionesses shot miserably from both the line and the perimeter making 16 of 60 while sinking only 7 of their 14 foul shots. But they won the rebounding battle 56-43.

Kenya had no one scoring in double figures. Mercy Wanyama led the tally with nine while captain Hilda Indasi and Shilalei Shani made six each.

Then came the second game that was to determine their stay in the competition. The Lionesses failed to meet expectations and registered a defeat to Cape Verde 57-64.

The loss made tensions to rise among the playing unit. The team was forced by circumstances to send a distress call to Kenya through a video recording saying that they were having a difficult time in Senegal, stating that the government had neglected them.

In the video, Captain Hilda Indasi demanded that the government and the federation sort the issue before their match with Angola which is set to be played today.

The players called women’s commission which is an extension of the women national team claiming that the budget that was allocated to them meant that each player would get Sh 5000 (US$ 50) per day.

According to the Lionesses, the budget was sent immediately after the team qualified for the AfroBasket tournament in Uganda. They asked the Women’s commission and other relevant parties to step in and help improve their situation in Dakar.

KBF chairman Paul Otula had already hinted out that preparations for the team to participate in the competition were not so good. But to the surprise of many, the release of the video has resulted in the federation making somehow a U-turn and going against the Lionesses.

In a statement obtained by Ducor Sports, Otula blames the challenges facing the team to coach Owino, whom he says failed to instil discipline into the playing unit.

“We have so far paid return air tickets for the contingent of 14. We have paid participation and accommodation fees. Each player has so far received an advance allowance of $ 100 just like the men and will be paid the balance upon returning home,” part of the statement reads.

“The girls should not project but focus on the remaining matches. They know coaches hardly use more than 8 players in a game of Basketball. So the 10 players are just good enough. We have so far reimbursed all international players their air tickets. The Coach should have pre-empted this and instilled common sense in the players."

According to sources, the latest lamentations put today's pre-quarter-finals qualifiers match against Angola in uncertainty after the players threatened to boycott over unpaid allowances.

Many of baskeball fans in Kenya remember the women’s team that made history 26 years ago by reaching their first finals. The Lionesses lost to the host but were the sole continental representative in the FIBA Women’s Basketball World Cup 1994 in Australia.

And after the promise their male counterparts showed in Bamako, finishing second in the tournament, it was clear that Kenyan basketball has quality but just lacks the support.

Cases of teams on national duty being neglected by the ministry and their respective federations have been rampant with women’s volleyball team, the Malkia Strikers and the Morans being the latest victims.